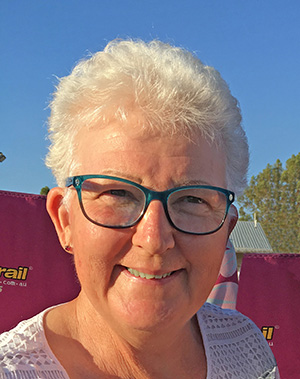 Julie Robert, the Director of Fat Frog Consulting, has been managing restoration of waterways, wetlands and catchments in Perth, Western Australia for more than 20 years, including the conversion of open, steep sided drains into Living Streams in Bannister Creek and many other waterways in urban Perth.

She became involved in Landcare in 1990, living near to the Bannister Creek, in Lynwood. She actively fought to save the creek from highly toxic pollution spills and sought action from government agencies to coordinate a pollution response system to protect the waterways of the Swan & Canning.

In 1995, as a landcare volunteer, Julie formed the Bannister Creek Catchment Group (BCCG) with a number of other local residents. The toxic pollution entering into Bannister Creek was killing wildlife - virtually wiping out the frog population.

Julie was the inaugural Chairperson of the BCCG, later becoming an employee assisting the Group to realise their dreams of creating a Living Stream from a highly urbanised and eroded drain. A major turning point came when the Group met at the creek with the local Aboriginal Elders who provided their guidance and blessing for the restoration work to begin.

Bannister Creek is the most successful transformation of a "Drains to a Living Stream" project in Perth. It is highly studied and there are numerous scientific papers available. Under Julie's coordination the BCCG became a highly successful group. In 2002, she was asked by a government agency to try to set up an even bigger version of the group to help administer other catchment and landcare groups in the region.

In 2009, as SERCUL CEO, Julie gained $4 million of Australian Government Urban Waterway Renewal project funding for the largest number of Living Streams Projects (11) to be undertaken at the same time in Landcare history in Perth. Julie helped to create, design and cost the projects which attracted equal in-kind support from community and state and local governments. The projects were delivered on time and within budget. These sites now attract visitors from all over the world viewing innovative urban stormwater management systems.

By 2014, Julie was instrumental in building the business of SERCUL to an annual turn-over of $5 million employing more than 30 environment and administrative personnel while also coordinating large numbers of volunteers and implementing major Living Streams and Landcare projects across the Urban area.

The achievements of the SERCUL organisation are due to the strength of a happy, well trained and experientially balanced team. Creating and maintaining such a team was a significant part of her role as the CEO. She has developed many riverine, educational and landcare based projects during her employment at SERCUL and BCCG which has given her a multitude of technical and interpersonal skills in many facets of environmental restoration, management and community group development.

In 2018, Julie Robert became the Director of Fat Frog Consulting, offering you the opportunity of gaining access to decades of tried and tested, highly successful, environmental management and project implementation experience.

To have the knowledge gained over 20 years of working in Urban Landcare and Living Streams made accessible to the environmental management and development community.

To provide consultation services and on-site project supervision, in the transformation of old drainage infrastructure into Living Ecosystems.

Looking for assistance with your Living Stream project?